Could there be more new jobs in solar by the end of 2016 rather than oil?

Indeed, the worlds highest traffic job site, estimates the solar industry will become the largest job producer by the end of 2016.

The decrease in job listings for those in the oil industry have occurred because of a slump in profits accompanying a large decline in demand. Job listings in oil are falling at an average rate of 12.6% over the past 8 quarters while solar jobs are falling at a much lower rate: 1.7%. When measuring the current market share, oil makes up roughly 50% of the industry globally while solar is sitting at 39%. If the current trend continues, the market share will change. 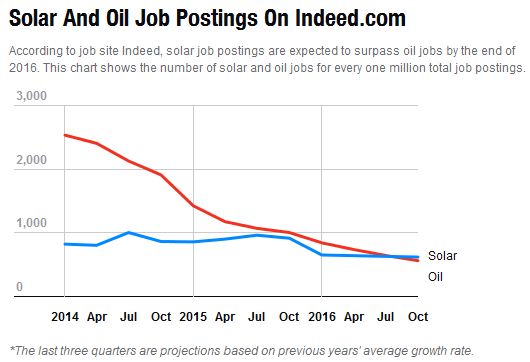 “The decline in oil prices has not just rocked that industry, but jobs linked to both fossil fuels and renewable energy,” said Tara Sinclair, chief economist at Indeed. “Whether or not solar overtakes oil on Indeed, energy workers would do well to position themselves for work in renewable fields such as solar, wind, and hydroelectricity.”

The solar sector currently employs 77% more workers than the coal mining industry and should have approximately 240,000 workers involved by the end of 2016.

In the oil sector, a 60% cut in oil prices is behind a substantial amount of of jobs lost over the last 18 months. BP plans to cut around 7,000 jobs in 2017 with Chevron following suit, planning to cut a whopping 10% of its workforce.